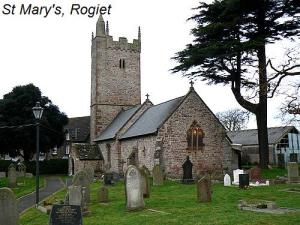 The church of St.Mary’s in Rogiet stands in the corner of its large church yard adjacent to the manor house.  The predecessor of this house was the home of the Gamages, earliest lords of the manor of Rogiet, who would have built the church chiefly for their own use.  Sometime in the comparatively recent past, it is not known exactly when or upon whose authority, the dedication of the church was changed.  The first saint whose name it bore was St. Hilary.  This may be the Welsh St. Eleri, an eighth century abbot, or St. Hilary of Arles, in southern France.  This latter dedication may indicate an early connection with the Christian church of what was then Gaul.   Another St. Hilary was bishop of Poictiers, who died in 367 A.D.  If the dedication was given to the church by the Gamages, themselves having come to Britain with William the Conqueror, this may be the dedication intended, and perhaps it is more likely to be a Norman foundation.  It is not suggested however, that any of these saints every visited Rogiet, rather that the church is dedicated to the memory and reputation.  An interesting feature of these early churches was the occasional absence of a font, which was sometimes due to the proximity of a well.  It seems that baptisms would take place at these wells, and when a font was eventually installed, water from the well would be used to supply it.  The church as we see it today contains little evidence of Norman, much less earlier origins.  Perhaps the font is the oldest survival here, as they often survived successive rebuilding of the church itself, an indication of the reverence in which they were held.  This font, although plain, is by no means crude.  The bowl is large and round with a short stem, and has been carefully carved from a single block of stone.  The rim of the bowl can be seen the points at which clasps were once fitted to secure the font lid in medieval times.  This was done to prevent the irreverent or superstitious use of the blessed baptismal water.  The bowl is supported by a short round column which has a splayed base over which is a badly damaged rib.  Some signs of decoration can be seen on the font, an area of blue paint being visible, and traces of decorated plaster still adhere here and there.

St Mary’s is a charming and unpretentious little country church dating, so far as we can tell, mainly from the thirteenth century, but with alterations made in the fourteenth and fifteenth centuries.  It is a typical small manorial church of chancel, nave and western tower, but very beautiful in it’s own right!

We know that the church is mentioned as being in the deanery of Lower Gwent in the time of Henry, Bishop of Llandaff, 1193-1218, so this puts it very early in the thirteenth century and probably in the twelfth.  Rogiet had a rector who eventually rose to become a bishop.  This was William Blethin whose family home was at Shirenewton, but despite this he may never have served at Rogiet.  He was also rector of several parishes in England and no doubt it was the income from these parishes which paid for his education at Oxford.  In 1562 he received the degree of Doctor in Civil Law and was consecrated Bishop of Llandaff on 17th April, 1557.

The Diocese of Monmouth